Did you know that jojoba oil is technically not an oil at all? It’s actually a plant-based liquid. However, in the context of skincare it’s used and treated like an oil, which is why it’s referred to as such.

Plant-based jojoba oil is a popular ingredient in many skincare products, and with good reason. It boasts a variety of benefits for the skin, lips, nails, and hair, many of which are backed by scientific research. In this post, we’ll introduce you to the wonderful world of jojoba oil, including how it’s made, its many benefits, and how to incorporate it into your daily routine.

What is Jojoba Oil?

Nope: jojoba oil isn’t actually oil! It’s a somewhat waxy liquid that comes from the jojoba plant. It’s referred to as an oil because of its consistency and emollient quality, which are both decidedly oil-like.

Jojoba plants are native to arid regions of the southwest US and northern Mexico. They don’t shed leaves when the seasons change, and take several years to mature and yield flowers.

Once pollinated, female flowers turn into hardened capsules, each of which contain one or multiple seeds. The capsules begin to thin as the seeds grow and develop, and ultimately splits open, letting the seeds drop out.

The seeds, which somewhat resemble coffee beans, are where the so-called “oil” comes from. They release a significant amount of liquid wax which is actually quite close in structure to the oils released naturally by the sebaceous glands in humans. This similarity makes it extremely well suited for skin care products, as jojoba oil is very similar to the makeup of the natural oils in human skin.

Jojoba oil has long been used in folk medicine, but in recent years has gained scientific appreciation for its superpowers in skincare.

Evidence has shown that jojoba oil can help remedy dry skin, reduce signs of acne, and provide deep hydration. Interested in learning about some of the specific benefits of this beauty product powerhouse? Here are 8 proven benefits of jojoba oil:

One of the reasons jojoba oil is so popular in skincare products is because of its powerful moisturizing properties that are uniquely suited to the skin.

In the human body, our sebaceous glands secrete something called sebum, which is an oily substance that helps keep our skin and hair moisturized naturally. However, as we age, the body begins to produce less sebum. The side effects? Less overall moisture, resulting in dry skin and hair.

Since jojoba oil is similar in makeup to the sebum our bodies produce, it’s the ideal stand-in for the real thing. It’s quickly and easily absorbed into the skin, hair, and lips, and can help the body maintain moisture in a way that feels very natural.

Jojoba oil can help promote healthy skin in a variety of ways.

For one, jojoba oil is a natural emollient. In the context of skincare, an emollient is a substance that has a softening or soothing effect on the skin. As an emollient, jojoba oil can help soften dry or flaky skin by helping to fill parched areas of the skin, smoothing them over.

Jojoba oil is also non-comedogenic. This means that it won’t sit on top of the skin, but rather will penetrate deep into the pores without clogging them.

Additionally, jojoba oil is chock full of wonderful antioxidants and is rich in vitamins and minerals including iodine, Vitamin E, and more.

Jojoba oil is an easy-to-absorb natural moisturizer that can penetrate deeply into the skin, imparting all of the benefits of the vitamins and minerals it contains. In short, it’s a great tool to have in your skincare repertoire!

If you look at the ingredients list of many common makeup removers, you’ll find that they’re full of chemicals. They may be effective at removing makeup, but at what cost to your skin?

Jojoba oil, on the other hand, includes only a single, naturally sourced ingredient that is extremely effective at removing makeup. Since it’s a naturally occurring substance, it doesn’t include added chemicals that could lead to skin reactions. Best of all, it’s suitable for all skin types and is extremely gentle on the skin--it’s even suitable for removing eye makeup. It’s also naturally hypoallergenic!

Jojoba oil’s moisturizing magic doesn’t stop at the skin: it’s appropriate for hair, too! Jojoba oil can help boost hair health in a variety of ways.

First off, it can help prevent dandruff. Don’t forget: hair comes from the scalp, which is skin. By moisturizing the scalp, you’re less likely to have dry skin on the scalp that flakes off--aka, a natural dandruff deterrent.

The oil can also be absorbed into the hair follicles to help add and retain moisture. Not only does this soften the hair and reduce frizz, but it acts as a natural detangler, so you’re less likely to break knotted hair when brushing your locks.

Additionally, in recent years, essential oils like lavender and cedarwood have been getting attention for their ability to help promote hair growth and help reduce symptoms of alopecia. However, adding an essential oil alone can be a bit too powerful--jojoba oil is the perfect neutral base to mix with an essential oil to enjoy these effects with a gentler application.

Fat is where it’s at in terms of lip care, and jojoba oil is rich in beneficial fatty acids. It contains oleic, lignoceric, and gondoic acids. This trinity of fatty acids can help deeply hydrate the skin. As a bonus, since jojoba oil is absorbed so quickly into the skin, it won’t leave a film on top of your lips.

Jojoba oil not only helps hydrate, but helps soothe and smooth lips that have cracked or dried due to cold or dry weather. This means that it’s the perfect way to prep your pout before putting on lipstick--after all, lipstick doesn’t look great when it’s applied to flaky lips!

Additionally, jojoba oil also acts as a natural barrier to help prevent the elements from drying out or damaging the skin of your lips.

Jojoba oil can be used by itself or mixed with other ingredients to create great lip care products. Check out our tutorial for a lip balm using jojoba oil in this post!

There are a number of vitamins and minerals occurring naturally in jojoba oil. But when it comes to skincare, one of the most important vitamins it contains is Vitamin E.

Vitamin E is a powerful antioxidant that is known to help reduce and control free radicals, which can contribute to visible signs of aging.

Studies have shown that vitamin E has an anti-inflammatory effect, both internally and externally. This means that if you’re exposed to environmental factors like dust, smoke, or excess sun (and who isn’t?), Vitamin E can not only help prevent damage, but it can help your skin recover from existing damage. The bottom line? The Vitamin E in jojoba oil is a nourishing ingredient for your skin that can help prevent visible signs of aging.

In addition to providing nourishment to the skin and body, the many vitamins and minerals contained in jojoba oil may be able to help minimize scars and stretch marks on the skin.

Vitamin E has long held a reputation as being helpful to reduce signs of scarring on the skin. While studies are still ongoing, it’s long been a popular treatment that is suggested by medical professionals.

One interesting study took a look at jojoba oil’s role in the treatment of skin lesions and acne. Participants used a face mask with jojoba oil, and in 6 weeks, both inflammatory and non-inflammatory lesions on the skin were significantly reduced.

Another study looked at jojoba oil’s ability to heal wounds. The findings showed that jojoba oil had a noticeable impact on the speed at which wounds close up and consequently heal. The study also found that jojoba oil helps to stimulate the synthesis of collagen, one of the main proteins in the skin--meaning it may help in rebuilding the skin following damage.

Not only can jojoba oil provide nourishment for the skin, but it’s also naturally antibacterial! When bacteria is exposed to skin, in particular broken skin, infections can follow. Nobody wants that--so by adding jojoba oil to your skincare routine, you’re actually taking a preventative measure against bacterial infections.

If you have developed an infection or fungus, jojoba oil may be able to help get rid of it faster. Studies have shown that jojoba oil can reduce inflammation in different animals, helping along the healing process; the belief is that these benefits extend to humans, too. 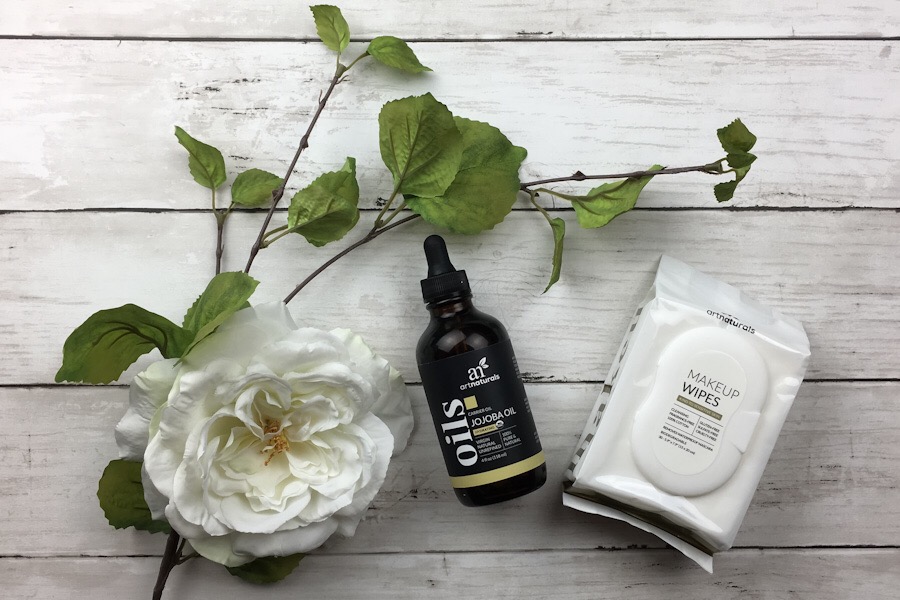 Incorporate Jojoba Into Your Daily Routine

Interested in incorporating jojoba oil into your daily routine? Good news: there are many ways to add it into your skincare regime. Here are some ways to do it:

Of course, as with any other product that you intend on applying topically, it’s important to use a high quality product. At ArtNaturals, we believe that the best beauty products come from nature, and we strive to keep our products as close to the natural state as possible.

Our jojoba oil is sourced from seeds from Israel, and is prepared via a cold pressing technique that preserves all of the nutrients in the plant-based substance.

It’s also long-lasting! When stored in a cool, dark environment, jojoba may last for five years or even longer! If there is no odor, the oil is considered safe to use.

The Final Word on Jojoba Oil

With its many vitamins and minerals, natural antibacterial and anti-inflammatory properties, and its ability to provide deep hydration for the face, body, and scalp, there are plenty of reasons to love jojoba oil. To review:

Have you incorporated jojoba oil into your daily routine? Tell us about the results!