How to Use Castor Oil for Healthy Hair

When it comes to carrier oils and hair care, castor oil always seems to get left out. Black castor oil gets mentioned every once in awhile, but no one seems to care to explain the difference between black castor and “regular” castor oil.

We’re here to lift the veil surrounding castor oil and give it to you straight. We’ll cover castor oil hair benefits, simple DIY castor oil recipes you can use for more #goodhairdays, and how to use it for your brows and lashes. We’ll also break down the difference between castor oil and black castor oil and explain how to use castor oil to balance pH levels of your hair and scalp.

What is Castor Oil?

Regular, or unrefined castor oil is a simple tale. Intense pressure is applied to raw castor oil plant seeds until the oil squishes out. The mashed seeds are filtered out of the oil and the resulting product is unrefined castor oil. This way of making castor oil is called the cold-pressed method due to the pressing of the seeds and the lack of heat used during that processing.

Unrefined castor oil is pale yellow and thick with a very mild aroma. Using unrefined castor oil for skin care is more common in practice, although there are also several benefits to using it for hair as well. Both types of castor oil contain high amounts of ricinoleic acid which can help soothe the scalp and hydrate hair. Cold pressed castor oil also has a low pH level, meaning it is more acidic (more on that later).

What is Black Castor Oil 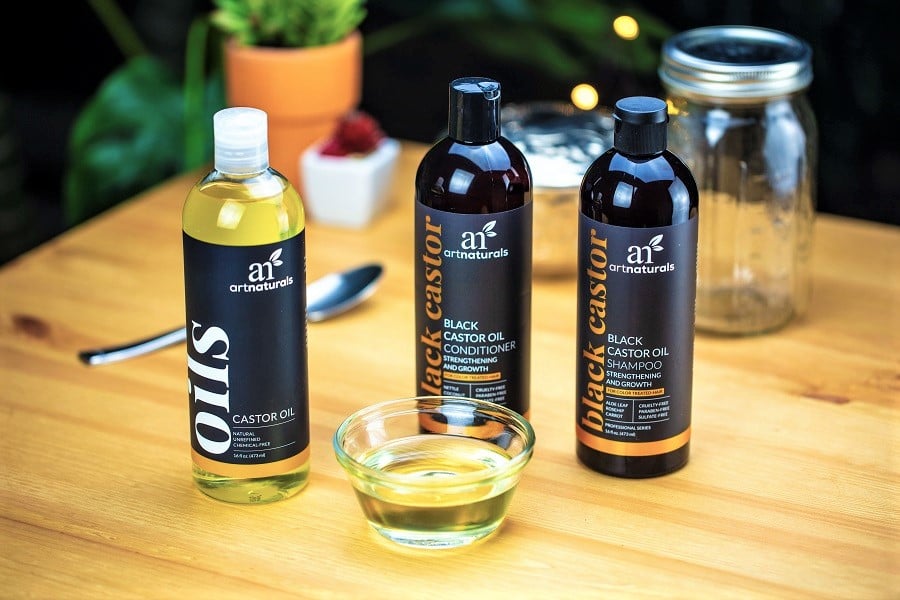 The pH levels of your hair and the pH levels of the oils should be the number one consideration when deciding between regular or black castor oil for hair care.

Cold pressed castor oil has a low pH level (more acidic) and black castor oil has a high pH level (less acidic and more alkaline). What does that mean? Well, you’ve probably heard the phrase “pH balanced hair” at the salon or in hair care commercials. That’s because human hair looks and feels the healthiest when it’s slightly acidic.

To choose the right castor oil hair treatment for your hair, first you need to figure out the current pH level of your hair and scalp. Once you know your pH level you can apply a castor oil with the opposite pH level.

How to Figure Out Your pH Levels

One way to determine the pH level of your hair is to pay attention to how your hair and scalp feel. If you experience a flaky scalp that itches, it’s likely your hair has been stripped of its natural acidity. In this case, your hair has a high pH level, so unrefined castor oil with its low pH level would be the best option.

Lower pH levels can also help reduce the friction between hair fibers and lead to less breakage and frizzing. Even if you don’t suffer from an itchy flaky scalp, unless your hair is naturally coarse, dry, or overly-processed, cold pressed castor oil is still most likely the best choice for your locks.

Another way to determine the pH level of your hair is to consider your hair’s texture and processing history. Naturally curly, kinky, or coarse hair tends to have porous individual strands and is more likely to have a low pH level. Same goes for hair that is damaged from a ton of chemical processing like perming and bleaching.

Porous hair is often very dry because it has a hard time retaining moisture. The open porous texture lets water in, but also lets it right back out again. The repetition of this process is called hygral fatigue which leads to hair damage and breakage. If your hair shows signs of a low pH level, the alkaline nature of black castor oil (high pH) can be used to restore balance so your hair stays moisturized. 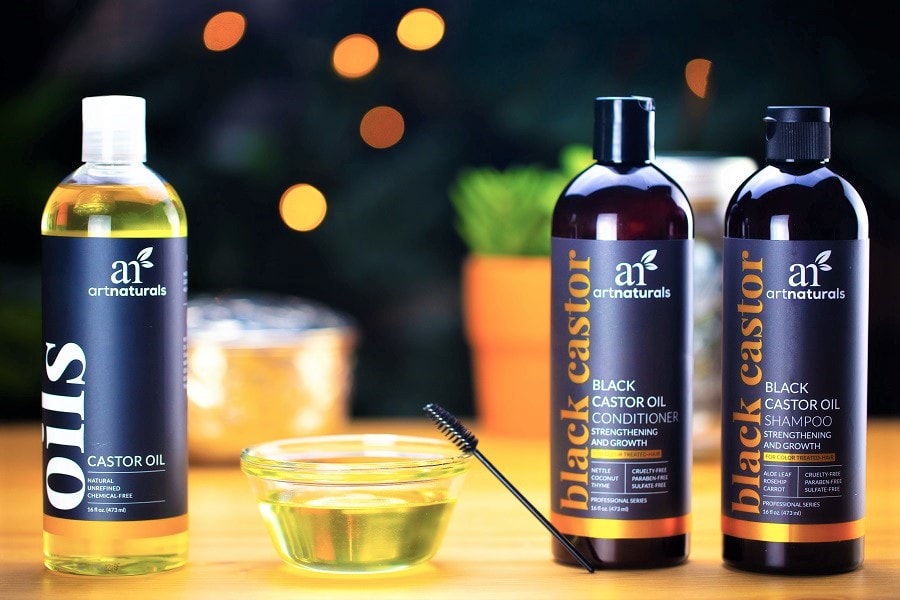 Castor oil has other hair benefits besides balancing your pH levels. Cold-pressed castor oil in particular is deeply nourishing for hair and scalp and can be used in a variety of ways to get better hair.

Castor oil is rich in ricinoleic fatty acids that are key in how castor oil works to condition your hair and scalp. Of all the natural carrier oils, castor oil is the only one that contains ricinoleic acid.

Moisturizers that are naturally humectant, like Castor oil, pull in water from the atmosphere and trap the moisture in place. The humectant properties of castor oil add to its moisturizing hair care power.

The moisturizing properties of castor oil that are good for hair, are also good for conditioning your scalp too. On top of that, the anti-inflammatory properties of RA help soothe minor inflammation which can help calm irritated scalps. Castor oil also has antibacterial activity to help keep your scalp clean and fresh.

Making your own natural hair care recipes at home is more affordable than you think. Castor oil is one of the least expensive and just a little goes a long way. Unrefined castor oil is super versatile and works really well as a base for adding essential oils to your hair care.

3 Easy Ways to Use Castor Oil on Your Hair

Step 1: Combine castor oil and other ingredients in bottle.

Step 3: Shake before each use to evenly disperse essential oils.

* For long hair or extra thick hair, doubling all ingredients is recommended.

Step 2: Mix in your egg yolks.

Step 3: Work the mixture evenly throughout until all hair is fully coated.

Step 4: Cover hair with shower cap, let sit 20 minutes. Use the other half of your avocado as a face mask, or a delicious snack!

Step 6: Repeat weekly or as needed.

How to Use Castor Oil for Eyebrows & Lashes

Eyebrows are hair too! So are lashes, and they both deserve the same conditioning TLC as the hair on your head. Conditioning your lashes and brows with castor oil is ridiculously easy. All you need is a couple drops of castor oil, a clean unused toothbrush and a small clean bowl or dish.

The key to getting this right is to remember to keep everything clean. You never want to take a chance cross contaminating beauty products or tools when you’re doing anything near your eyes.

Step 1: Add a few drops of castor oil to your bowl or dish.

Step 2: Dip your clean brush in the castor oil.

Step 3: Apply first to the tips of your lashes, just like mascara, then brush on your brows.

Step 4: Let sit overnight and wash your face in the morning. Repeat 1-2 times per week.

Unrefined castor oil is an inexpensive, versatile carrier oil with several hair benefits. Rich in ricinoleic fatty acids, castor oil is a humectant moisturizer that deeply conditions both hair and scalp. Cold-pressed castor oil can also be used to condition your eyebrows and lashes, and for mixing with essential oils to make your own homemade natural hair products.

These statements have not been evaluated by the Food and Drug Administration. This information is not intended to diagnose, treat, cure or prevent any disease. The information on this site is meant for educational and informational purposes only, it is not intended or implied to be a substitute for professional medical advice, diagnosis or treatment. Please confirm any information obtained from or through this web site with other sources, and review all information regarding any medical condition or treatment with your physician. Never disregard professional medical advice or delay seeking medical treatment because of something you have read on this website.